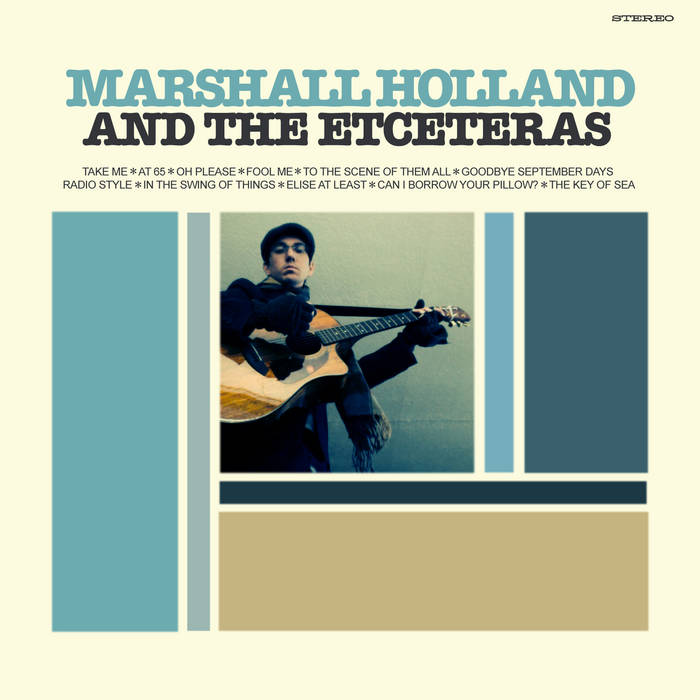 Gorka Great album.
Somewhere in between the moods of Josh Rouse's '1972' or 'Nashville' and aussies Bob Evans. Favorite track: Elise at Least.

Hailing from Salinas, California — the land of Steinbeck, strawberries and spinach — Marshall Holland is a golden state native with an ear for radio-ready melody, and the artistry to turn those melodies into fully realized pop soundscapes.

Growing up on the radio while traversing the state’s coastal agricultural lands on ride-alongs for his grandfather’s fertilizer business must have done something to the boy. Armed with a portable tape recorder, Holland would make recordings of himself singing the hits of the day, which he would later “broadcast” back home in his bedroom.

Thank goodness, he’s still at it. Over the course of his three releases, Holland has perfected his approach to baroque pop hooks with a hovering specter of melancholy—along the lines of the Left Banke or the Three O’Clock—while occasionally rocking enough to put him in the same garage as the Monkees or Weezer.

His new album, “Marshall Holland and the Etceteras” sees the multi-instrumentalist stretching out stylistically and vocally, turning in everything from sing-along numbers (“Take Me,” and “Elise at Least”) to downbeat ruminations (“Fool Me,” “Goodbye September Days”) that are kindred in spirit to the esoteric back pages of the Simon & Garfunkel songbook. There are instrumentals here, too, that juxtapose his three-minute popsongs nicely, adding depth and providing subtle stage directions for each new chapter.

The characters that populate his tunes aren’t the shiny, happy people that seem to exist in too many of today’s indiepop compositions. Things don’t always work out for Holland’s protagonists. They find themselves suddenly lonely, they sleep on the streets, and they navigate uncertainty in a way that suggest their writer might know a thing or two about love, loss and real life.

Cutting his teeth in Sacramento in his early 20s before heading to the Bay Area, Holland found himself in constant demand as a backing musician, playing drums, bass, guitar—whatever was needed—in touring bands and local stalwarts. While it was great experience, he ended up fleeing the scene and setting up shop closer to the coast, where he had more time to cultivate his own songwriting process.

Finding himself with a little more downtime than he bargained for, he started making records on his own, playing all the instruments, designing artwork, and doing whatever it took to get his music heard. Instead of coming off as DIY art projects, Holland’s music never feels anything less than natural and self-realized with a pinch of opulence.

What the press is saying:

“On Marshall Holland's new album, ‘And The Etceteras,’ the San Francisco-based indie singer-songwriter has written some of the most tuneful, irresistibly joyous pop songs you're likely to hear this year. Holland combines the warm, melodic vocals and yearning of '70s power pop with an immediacy that's totally up-to-date.”
—Echo Magazine

“Self-contained and confident, Marshall Holland and the Etceteras has everything working in its favor, from high quality songwriting to dense and disciplined performances. Not an ounce of fat penetrates the material, as the tunes are kept neat and trim. Sounding like a clever cross between the Zombies and Crowded House, with touches of the E-Types, the Cyrkle, and Shoes thrown in for good measure . . .”
—Something Else

All rights reserved. Unauthorized duplication is a violation of applicable laws.

Recorded and produced by Marshall Holland

All Instrumentation and vocals by Marshall Holland